(UPDATE 7/1/2012: Some of the entries that Gill commented on have since been deleted from the site. However, I have created a standalone blog called Gill Was Here that has all his postings from my site.)

I was going back over Steve Huff’s entry on Kimveer Gill seeing what comments he was getting. Steve had updated his entry and I read something that made my heart drop…

Kimveer Gill, as you might expect, didn’t just start aping the style and mannerisms of past psychos like Eric Harris and Dylan Klebold. He probably had been going down the deadly road he was on for quite some time.

To my surprise, I found posts by Gill (and at this point, for all I know, others have already found these as well — this story promises to be very heavily covered by everyone because the guy had an online journal) on the Usenet.

Gill used the Yahoo address rogue_warrior_50@yahoo.ca, and in November of 2005, he posted to this newsgroup: http://groups.google.com/group/aps-global-solutions/.

I knew that e-mail address well. rogue_warrior_50@yahoo.ca had left comments on this very site. I understand that you’re skeptical. I would be too. Let me provide some photographic proof for you. This is a picture of my blog’s control panel… 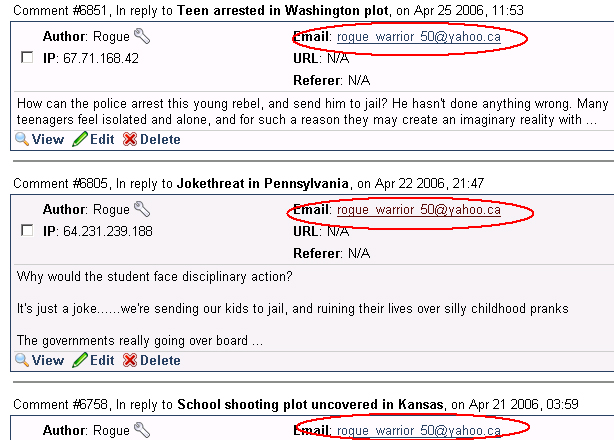 He went by the name Rogue and left the following comments…

On an entry about Christopher Penley, the Florida teen who was shot and killed at his school for brandishing a pellet gun at police, entitled “Was lethal force justified?”, Gill left this comment…

The police used extreme force. It’s completely unacceptable. The Rebel was moving the gun in all directions, very fast. He didn’t once point, steady, stance and aim it. He was just swinging it around. And everyone knows you can’t kill someone like that, if you’re moving it around, at the sky, and whatever. No shots were fired by the young Rebel, he didn’t even hurt anyone.

That cop is a coward. He was attacked earlier in his life. And ever since that he has become paranoid, and scared. Like a girl after she gets raped. Afraid of everything and everyone. The police had been told earlier that it wasn’t even a real gun. They didn’t even mention that on T.V.

The police kill another innocent person

I don’t understand what’s wrong with this country. Two schoolgirls were playing around, joking if you will, and now they’re going to go to jail, just for a joke.

When I was in High School people would say they were going to kill each other all the time, no one got in trouble.

Why have the masses on this earth turned into cowards?
Where are the warriors

A student at school makes a joke, and the police spend all their resources to stop him. “A little joke”

The young lad was just letting off some steam. Give him a break. Come on, where’s your sense of humour?

Nobody goes on a killing spree with a pitchfork.

The country is full of child molesters, priests, rapists, and child molesting priests. Can we perhaps take them off the streets before spending all law enforcement resources on a teenager’s prank.

You people make me sick

Poor Christopher
He did nothing wrong
Commit no crime

I can’t believe the school would over-react like that. Children at school can’t even joke around anymore. And for the police to go along with this, I mean, come on…..this is shocking.

They’re slowly turning the country into a police state

My friends and I have said things like that at when we were still in school, and we never thought we would go to jail for it. I don’t understand what kind of society this is. I thought we had freedom of speech.

I had a feeling someone was going to try to do something like this on the 20th of this month. The cops got it all wrong. They wern’t going to do it for real. They’re just kids having a little fun. I hope the pigs don’t actually give them a fine or 2 weeks in jail, cuz’ that would be an injustice.

If they were really going to do this, they would not be posting messages on MySpace and telling people in their school about it.

I can’t believe the police have nothing better to do than waste tax payers money on stuff like this. I mean come on now……Boys will be boys

Why would the student face disciplinary action?

It’s just a joke……we’re sending our kids to jail, and ruining their lives over silly childhood pranks

The governments really going over board here

It’s time to take the power back

How can the police arrest this young rebel, and send him to jail? He hasn’t done anything wrong. Many teenagers feel isolated and alone, and for such a reason they may create an imaginary reality within their own mind, such as shooting people.

If he was really going to kill alot of people then he wouldn’t be telling people he was going to do it. It’s just common sense. I believe he just wanted a little attention, nothing more.

Lets hope he gets outta jail soon, and the police give him back the guns the seized

For that comment, I banned him from leaving comments on my site.

The last time I heard from him was from an e-mail he sent me which you can see here.

21 thoughts on “Kimveer Gill was here”