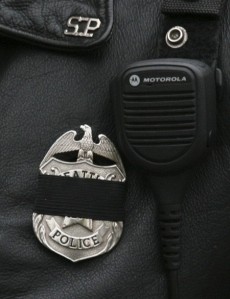 In the last days of 2011, a statistic was released that said 173 local and federal police officers were killed in the line of duty as of 12/28/2011. That’s 173 men and women with friends, families, and colleagues. That’s 173 people who were murdered while doing the thankless job of protecting our safety and well-being. And as the kids say, not a single fuck was given that day. But you pepper spray one spoiled white kid, and it prompts a national week of outrage.

The police in our country are basically another branch of the military. They fight for domestically what those in our armed services fight for abroad. That being the protection and well-being of the citizens of the United States, no matter what your conspiracy-laden mind might have you believe. So why is no one protesting in the name of the violent deaths of these police officers?

It’s because most of you don’t give a shit. Most of you see police as some kind of nuisance. A lot of you think freedom means that you should be able to drive 120 mph through a school zone while drunk or that you should be able to share a bowl with your 7-year-old and that the cops are just there to harsh your buzz. But when someone breaks into your house, steals your cell phone or Burger King won’t serve you a Big Mac, they’re the first people you call.

Much like the prevailing selfish attitude in America, you only care about the police when they can do something for you and if 173 people die because of it, so be it.