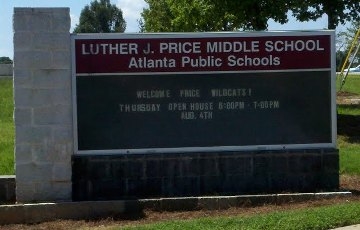 Victim ID’d by TV network in Atlanta middle school shooting, released from hospital after suffering gunshot to the neck:

Last week there was a shooting outside of Price Middle School in Atlanta, Georgia. You may have heard you may not have. 14-year-old Telvis Douglas was the intended target, and he was shot in the neck from behind by his yet to be named assailant. Telvis was shot while trying to run away from the shooter. Luckily, his injuries were not life-threatening. The suspect is also said to be a student at the school, and after he shot Telvis he was said to have emptied his magazine into the crowd of fleeing children. Thankfully, no one else was struck by the bullets. The suspect was apprehended and disarmed by the school’s resource officer an off-duty Atlanta cop.

Supposedly the metal detectors at the school were not working that day. Now since the shooting took place outside the gun may have been stashed outside for all we know. Was the gunman even in the school at all that day? Was he waiting outside for Telvis Douglas? All of that remains to be seen at this point.

So far no motive has been released but the suspect and the victim did know each other.

So, how come there’s been no outrage over this latest shooting? Why are there no calls to arm the Atlanta teachers? Why did this story have such a short shelf life in the media? I think the answer is obvious. The victim in this story is black. It seems that media coverage and our society’s outrage are only reserved for when white children get shot.