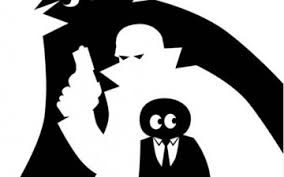 In the days following the shooting at Seattle Pacific University, former crime blogger Steve Huff and myself were having a conversation about the reports of a second shooter at SPU. We both agreed that to our knowledge that there were only two instances of there being more than one shooter, those being Jonesboro and Columbine. Then I remembered something from my early days of blogging that there was a conspiracy theory that said there was a 3rd shooter at Columbine. So where do these reports come from. Is there some sinister plot at work aside from the atrocities that took place? Was there some ulterior motives to these attacks? No,of course not. Don’t be ridiculous.

“Offhand, I can only think of Columbine and Jonesboro, Arkansas,” Mike Roche, a retired Secret Service agent and former Arkansas police officer, told ABC News of cases of multiple shooters.

“Most of the multiple sightings are attributed to eyewitness accounts providing conflicting descriptions of the suspect or the perception of a fleeing person as a potential attacker,” said Roche, who’s written a book about how to identify mass killers.

“It’s just the pandemonium in a stressful situation like that,” Roche said.

The problem is you can’t discuss things rationally with conspiracy theorists. It’s akin to arguing religion with someone, it’s more about beliefs than it is about facts, the conspiracy theories are dogma to them. No matter how much evidence is presented to them to the contrary they’ll just say that those facts are all part of the conspiracy. For example take Mr. Roche who I quoted above. As I mentioned he’s a former member of the Secret Service. The conspiracy theorists will tell you that since he was a member of the Secret Service that he’s in cahoots with the New World Order or the Illuminati or the Freemasons or whatever group they think is running the world.

It’s my aim to try to prevent more people from becoming so delusional. Don’t be like them. It’s my belief that they use these elaborate fantasies to make up for inadequacies in their own life or the fact that they just don’t have the intelligence to grasp the obvious.