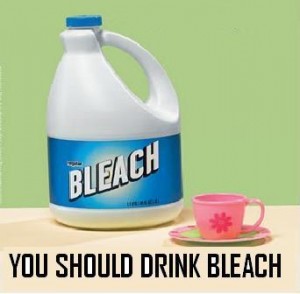 We’re all familiar with bleach right? The stuff that makes your clothes white even if they weren’t white before. The stuff that when mixed with ammonia makes chlorine gas. (Don’t ever mix those two.) Lastly and most importantly the stuff YOU’RE NOT SUPPOSED TO DRINK. Are we this dumb as a society that there are people out there that really think it’s ok to drink bleach let alone give it to their kids.

Apparently there is as we go to Bunker Hill, Kansas, where Pam Pertl is accused of making her foster kids drink milk that was laced with bleach. I guess it’s ok since wholesome milk was involved. Anyway, why did Ms. Pertl allegedly give the teens bleach and milk to drink. Why to mask their drug test results since she was allegedly smoking weed with her foster teens. Guess what, it didn’t work as they all failed the drug test.

I’ve been around enough burnouts to imagine how this happened. “Dude, this one guy told me that of you drink bleach you can pass a drug test. We should so try that.”

Talk about how harmless weed is all you want it’s still a crime in 48 states. Deal with it.

Here’s what to do in case someone were to drink bleach.

Thanks to Denise for the tip.