3/2017: UPDATE: There’s still no evidence any of this happened, but I’ve posted a new entry about how Facebook refuses to remove the picture.

1/2017 UPDATE: Let me save you some time since this is making the rounds again on Facebook. There still have been no criminal charges filed. The police do not currently have any arrest warrants out. Just because your friend’s uncle’s cousin’s roommate said it was true doesn’t make it so. If a crime has been committed, by reposting this picture on Facebook you’re actually impeding the investigation. In short, stop being a dumbass.

So I regrettably open up Facebook this morning and I’m greeted with this photo posted by way too many people who should know better. 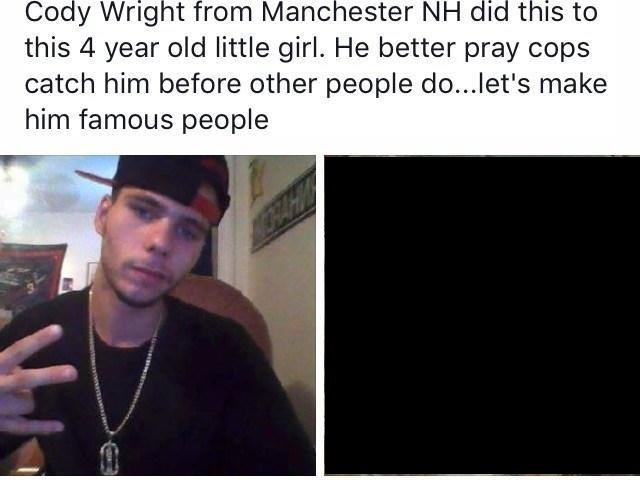 I can almost guarantee that this is a hoax.

First off the earliest I found this posted to Facebook was December 18th. That’s over a week ago, I would imagine that in that time if these allegations were true someone would have notified the police about this. According to the Manchester Police Department’s website a Cody Wright is not currently on the run (pdf) nor is someone by that name in custody anywhere in the state of New Hampshire. There are currently no news articles in New Hampshire or anywhere else mentioning any crimes committed by a Cody Wright. Nothing about it anywhere of importance in the past 12 days except the cackling hen-house that is Facebook.

More than likely you’re spreading the photo of an innocent man. If you think there’s no harm in doing that I’ll remind you about Chad Michael Lesko who was accused of child rape on Facebook. That turned out to be false but not after he and his mother received thousands of death threats. It turned out that the post was started by a friend of a woman he broke up with. That could very well be the same situation with the alleged Mr. Wright.

Even if this story turns out to be true, which I almost guaran-damn-tee it isn’t, let the police do their job. By posting and reposting this meme saying that he should be found before the cops find him could potentially ruin any chance of prosecution.

I know too many of you believe Facebook is the truth and the way and the light but it wouldn’t kill you to get off of Zuckerberg’s teat every once in a while and think for your damn self.

UPDATE 1/9/2016: I was going through some Facebook posts about the situation to see if anything new has developed and lo and behold I found this. It seems that there may have been a response by the Manchester PD after all… 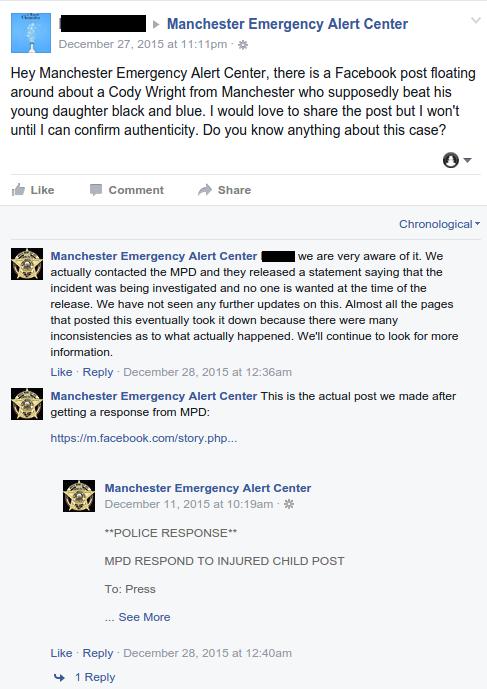 The release from Manchester PD goes as follows…

A picture has surfaced on social media, specifically on Facebook of a child with injuries.

The Manchester Police Department is currently investigating as to whether or not there is a criminal aspect to the case.

We as an agency would not and did not submit or post these photographs. Furthermore, the investigation remains in its infantile stage and no one is wanted at this time.

So this response was made a day after the original picture went up yet that still didn’t stop the yokels from organizing a Facebook lynch mob that is still reposting the picture as if it’s gospel.

UPDATE 1/25/2016: Once again the Manchester Emergency Alert Center has reached out to the Manchester, NH, police and this is how they responded. 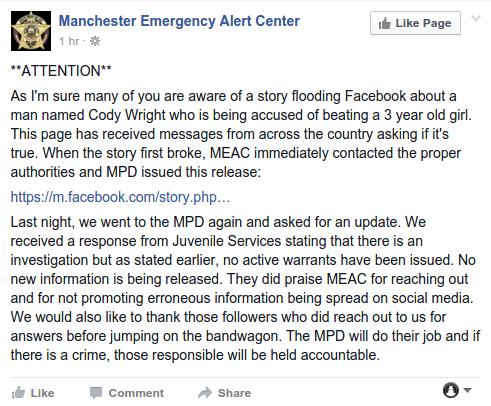 We received a response from Juvenile Services stating that there is an investigation but as stated earlier, no active warrants have been issued. No new information is being released. They did praise MEAC for reaching out and for not promoting erroneous information being spread on social media. We would also like to thank those followers who did reach out to us for answers before jumping on the bandwagon. The MPD will do their job and if there is a crime, those responsible will be held accountable.

It can also be found at this link.

However I wanted to stress this point, “The MPD will do their job and if there is a crime, those responsible will be held accountable.”

So again, if a crime has been committed let the police handle it.

161 thoughts on “Stop sharing the Cody Wright picture on Facebook”