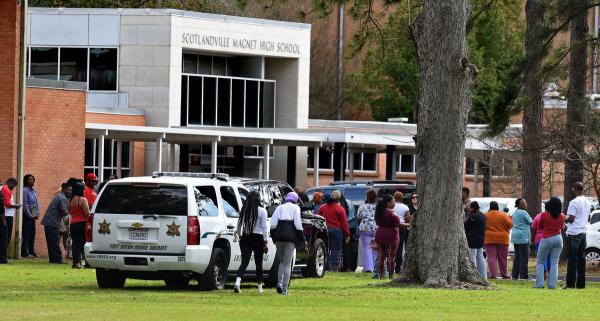 A 14-year-old suspect has been taken into custody after he allegedly produced a weapon and opened fire on the campus of Scotlandville Magnet High School in Baton Rouge, Louisiana. Luckily, no one was struck by the bullets.

Early reports say that the student was a recent transfer to the school and witnesses say that the suspect was going to fight someone at lunch before pulling the gun and firing randomly outside. Please keep in mind that early reports of shootings like this can often be rumors and are subject to change.

The suspect was caught off campus by a plainclothes detective after the shooter allegedly threw the gun onto the roof of a building. The gun has been recovered. So far the shooter has not been named due to his age. Also there’s been no word on how the gun was obtained.

Since he was a new kid and was allegedly supposed to fight someone I can almost hear the ‘bullying’ cry going out. Let’s wait before we hear more details before we start the weeping and gnashing of teeth. As with the majority of shooters, it could very well turn out that he’s the bully. Even if he isn’t, it’s still no reason to try to kill someone.

UPDATE 2/7/2017: Investigators say that a fight between the shooter and four other students started on social media. No word what the fight was about yet.

UPDATE 2/9/2017: Yesterday, bail was set for the suspect at $110,000 on second-degree attempted murder charges. As of yesterday he was still being held in juvenile detention.

UPDATE 2/14/2017: Yesterday another student of the school, 17-year-old Quantae Kentrell Gray, was arrested for bringing yet another gun to the school. This same article that I linked to also identified the initial suspect as 14-year-old Jermaine Moore.