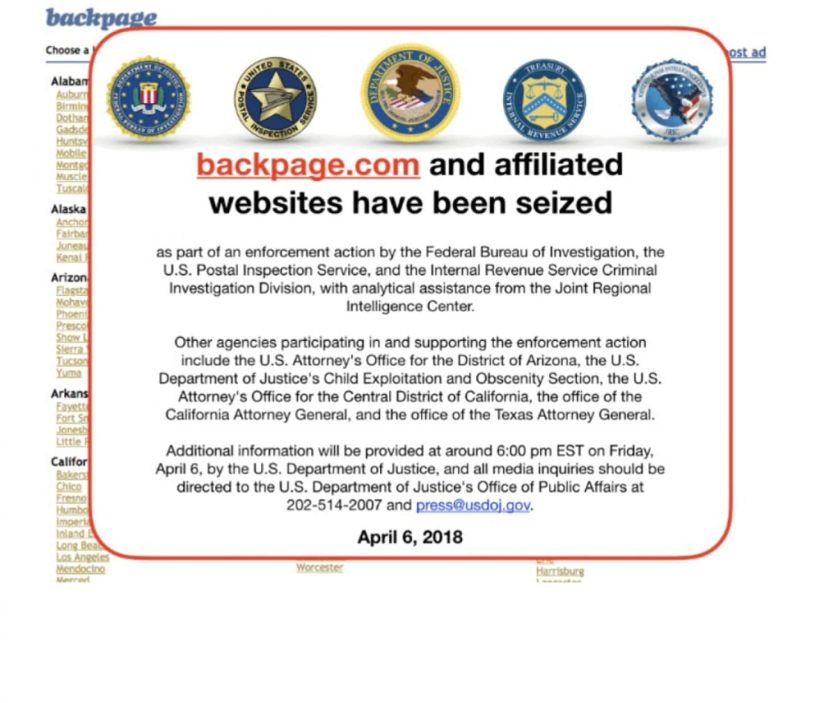 I’ve been behind in posting stories about the legal battles befalling Backpage, such as the passage of the SESTA/FOSTA bill that would amend section 230 of the Communications Decency Act of 1996. The legislation is worded so websites that knowingly facilitate human trafficking would be held legally responsible. However, even before SESTA/FOSTA could be signed into law by the President, the Backpage website was seized by State and Federal authorities this past Friday.

Anyone going to Backpage online on Friday was greeted with the Department of Justice’s declaration that Backpage had been seized as part of an enforcement action by not only the FBI but also the US Postal Inspector’s Office and the IRS. It’s the IRS’s involvement that leads me to believe this is finally the last we’ve seen of Backpage. According to Wired Magazine, there has been a 93 count indictment against seven people involved with Backpage where one of the charges is money laundering. I would even hazard a guess that maybe Backpage and its cabal of founders may not have been exactly forthcoming on their taxes. Let’s not forget that this is almost the exact same way the Feds were able to finally take down Al Capone. One of those people charged in the indictment was Backpage co-founder Mike Lacey. I would imagine that indictments for Backapge CEO Carl Ferrer and co-founder Jim Larkin can’t be far behind.

Surprisingly, this is not the first instance of the Feds seizing a website that was involved in the facilitation of human trafficking. Back in 2014, the FBI seized MyRedBook which was a similar site to Backpage but on a much smaller scale. In that case, the site owners were also accused of money laundering among child prostitution charges. That site’s owner was convicted and was forced to relinquish over a million dollars in cash and assets and was sentenced to 15 months in federal prison. Since Backpage operated on a much grander scale, I would imagine any potential fines and sentences would dwarf those of MyRedBook.

Since FOSTA/SESTA has yet to be signed into law, its detractors will say that we no longer need the legislation since Backpage was shut down without it. To those I say FOSTA/SESTA is still needed to prevent another website to rise from Backpage’s ashes like Backpage rose from craigslist’s. No woman or child ever deserves to be turned out online like so much property to be sold into sexual slavery over and over again on a constant basis.

And for those who claim to be ‘legitimate’ sex workers who say Backpage made it safer for them to ply their trade, I have a couple of things to say. The first is, any supposed safety that you perceive to have given to you by Backpage is nothing more than a talking point and an illusion. For all your safety, there were a plethora of women who were either raped or killed by men who had their victims delivered to them through Backpage like they were some kind of murder pizza. The second thing is, if you supposedly have the freedom to choose what you’re doing and are not being coerced by any kind of pimp or trafficker like so many have claimed, maybe this is your sign to pursue more legitimate ventures in your life. You know, ones where you don’t have to worry about pimps, violent johns, and other potentiality tragic hazards of the job.

2 thoughts on “Backpage seized by Feds on Friday”